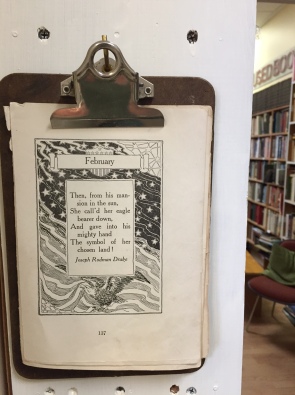 Here we are again. February.

“Even though February was the shortest month of the year, sometimes it seemed like the longest,” J.D. Robb. And there is, “When God was making the months I think February was a mistake, like a burp. There it was, small, dark, and prickly. It had absolutely no redeeming qualities,” Shannon Wiersbitzky, WHAT FLOWERS REMEMBER. And how about from Alice McDermott, “The day and time itself: late afternoon in early February, was there a moment of the year better suited for despair?”

A side note: a customer called to wish me Happy February. “Just try and make the best of it,” she said. She gets me.